The 2018 edition of TEDxReggioEmilia, Humanity beyond Humanity, has just ended. After seeing hundreds of videos on Youtube in these recent years, I have finally been able to assist (and contribute) in first person to a TEDx event. 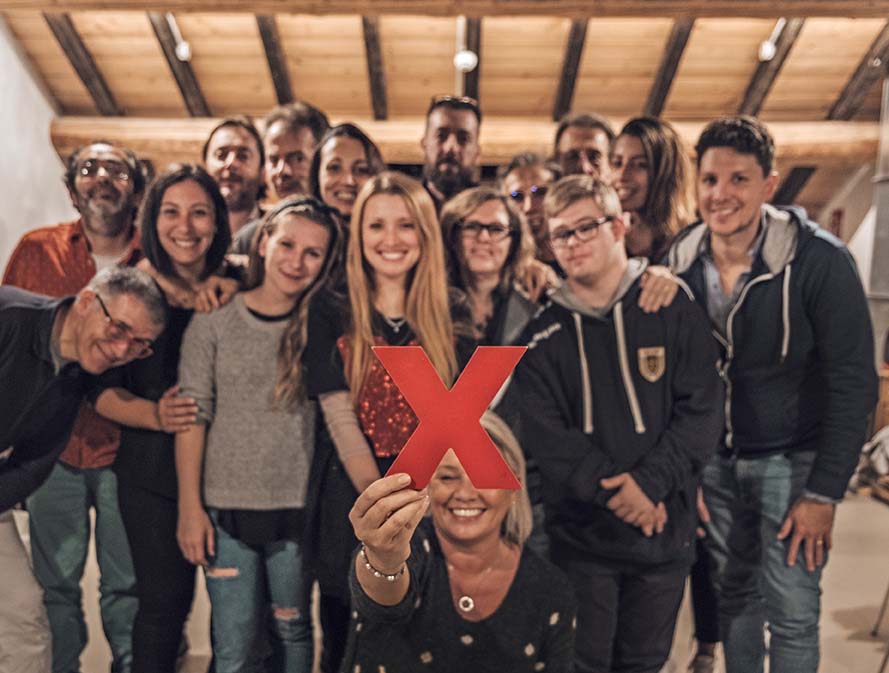 They told me it would be intense, but I didn’t imagine it would have been SO intense. Moving, exciting, life-changing. Already attending the rehearsals the day before the event I heard a big CRACK inside.

But let’s start from the beginning.

After a series of fortunate events, in 2018 I joined the Marketing & Communication Team of TEDxReggioEmilia. In particular, I co-worked with Silvia Ciampa on Instagram strategy and management + production of visual content. Yesterday, at the Humanity beyond Humanity event, I was also one of the 3 official photographers.

Some questions that you’ve asked me these past months are:

TED (Technology Entertainment Design) is a non-profit organization that aims to share “ideas worth spreading”. Launched in California in 1995, every year hosts international speakers that talk about different topics, such as environment, sport, personal growth, science, art and much more. 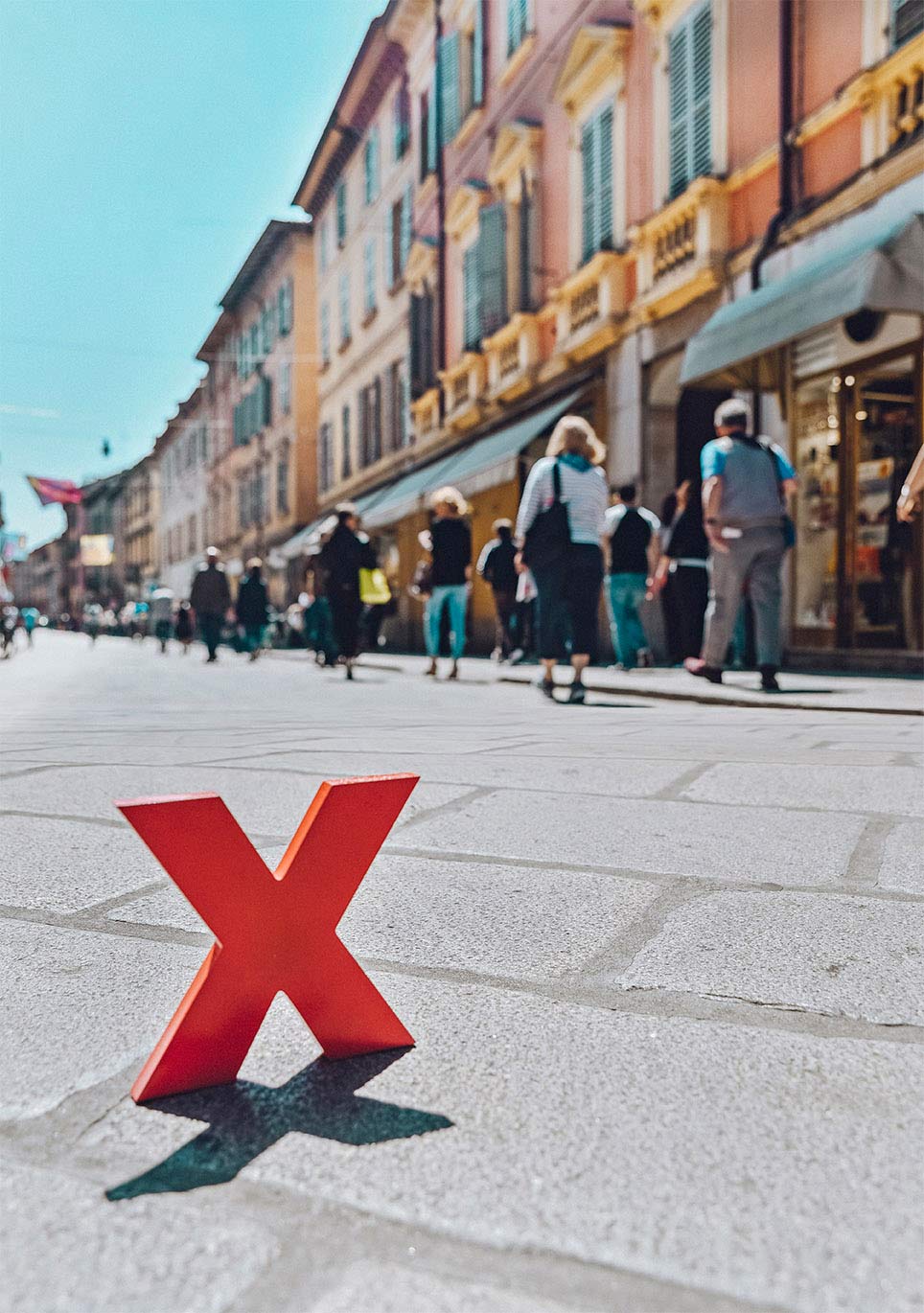 TEDx events are organized locally and INDEPENDENTLY.  They can be organized in every city, provided that the TED guidelines are respected.

The speakers, selected and invited to share their ideas at an event, hold micro-conferences with a maximum duration of 18 minutes, which will then become part of the TEDx online library.

Only one official event per year is held, but other micro events called TEDxSalon can be organized to give continuity and frequency to TED-style meetings. 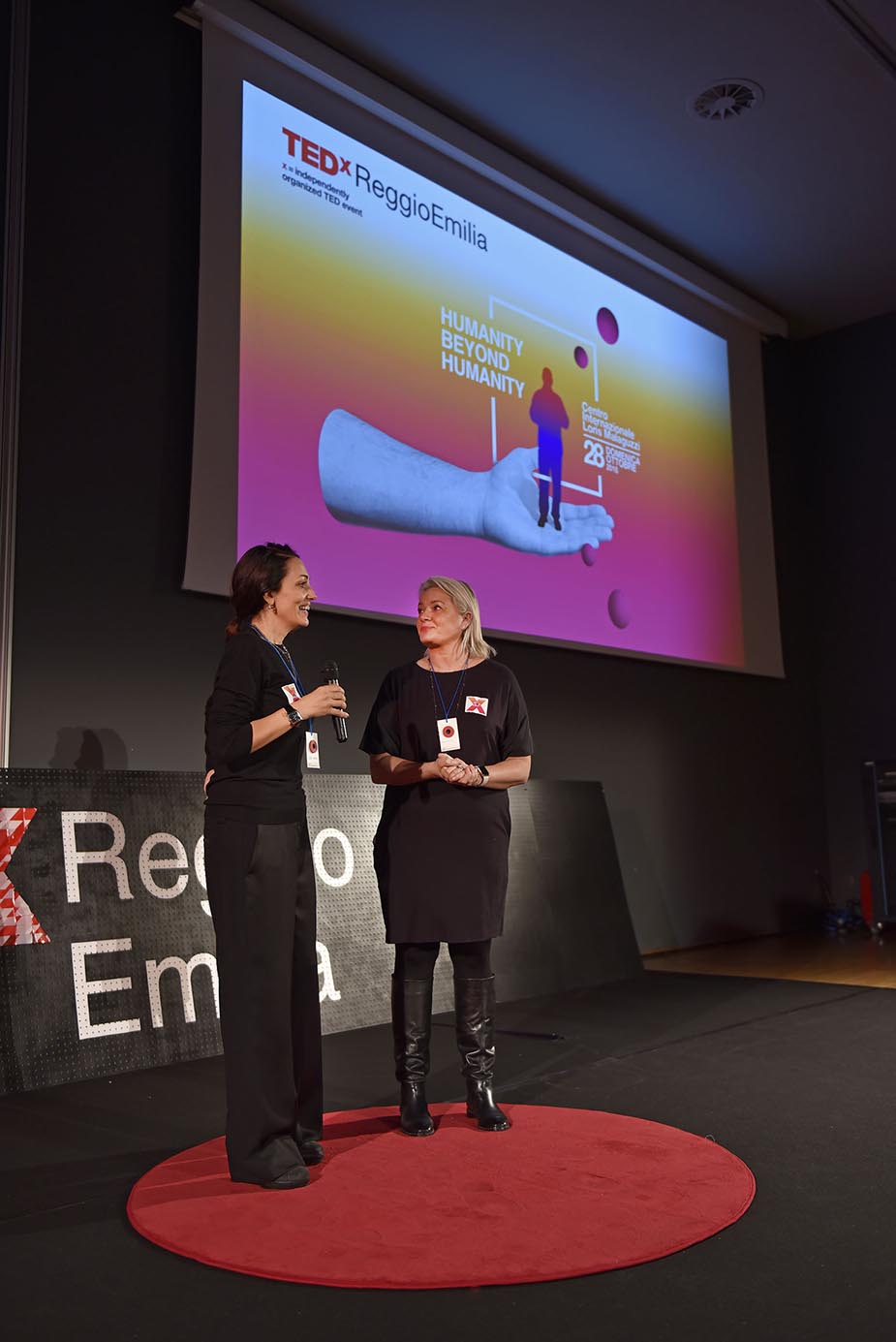 The one that took place yesterday, October 28th, at Loris Malaguzzi International Center (Reggio children) was the fourth edition of TEDxReggioEmilia, after the events held in 2011, 2012 and 2017. 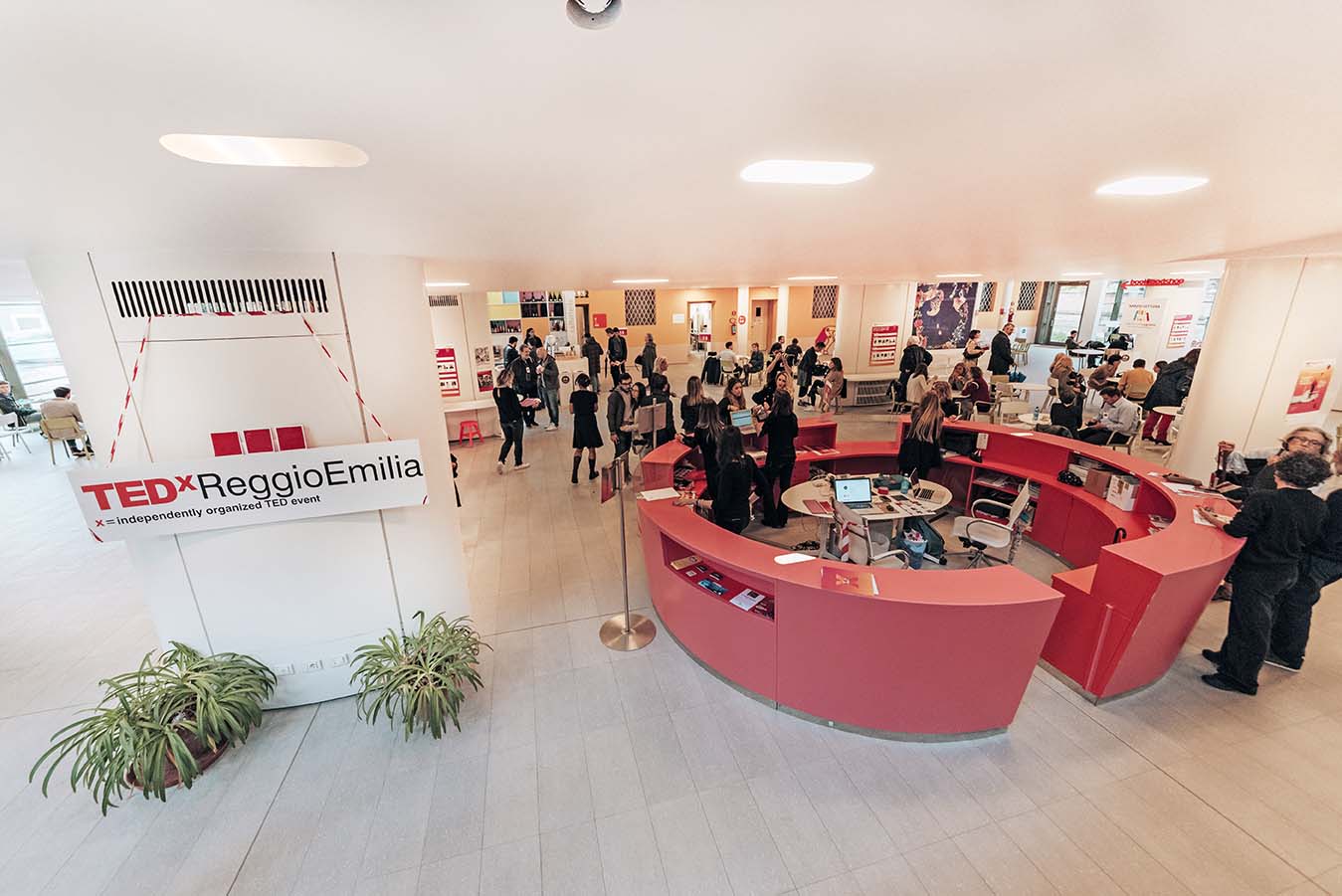 The theme, Humanity beyond Humanity, aimed to explore the complex human condition living in an increasingly technological and digital era. The 12 speakers brought different opinions and experiences, but that certainly ispired us and made us re-think our own beliefs. 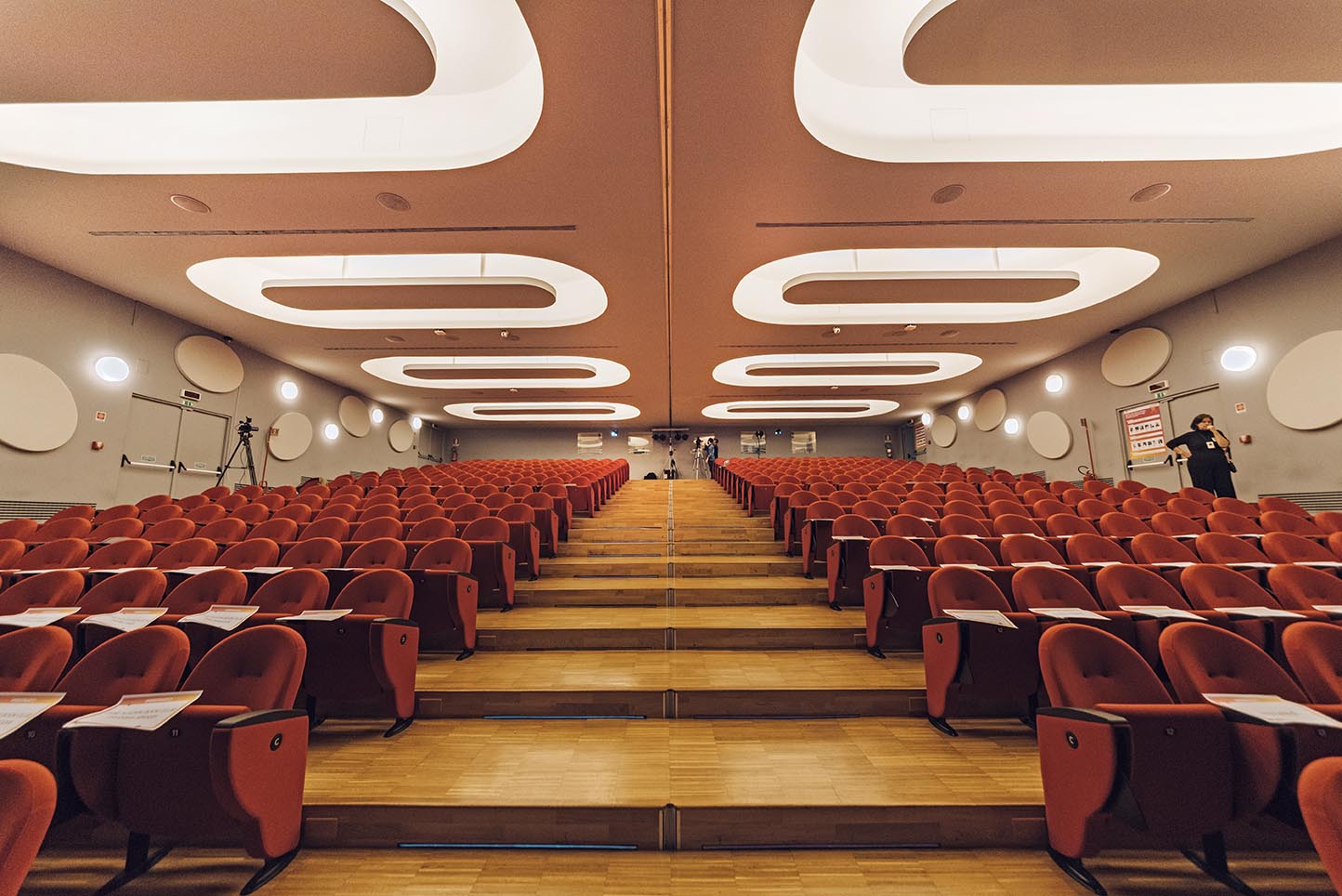 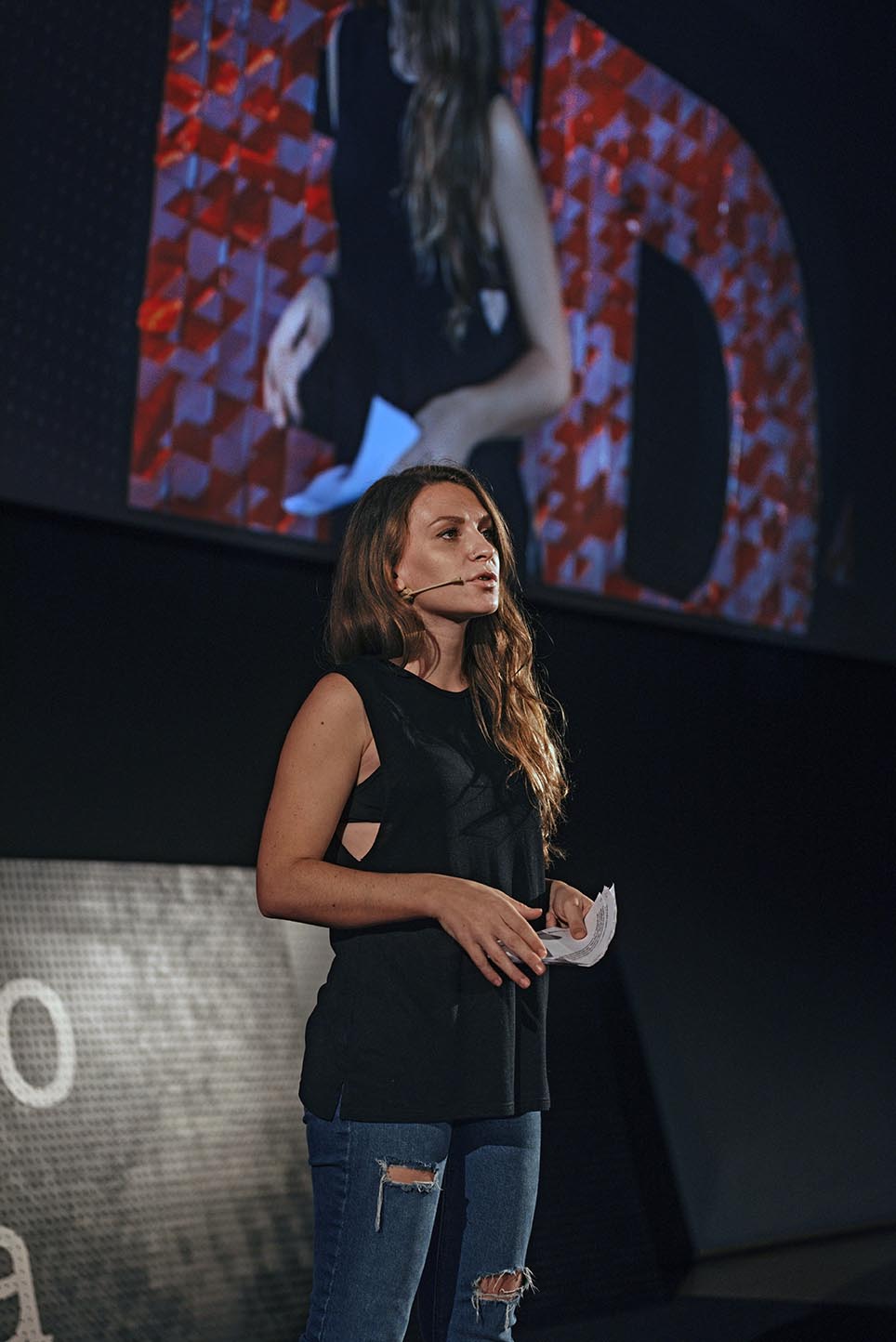 I met Sara when we were still living in Los Angeles in 2013 and over time she has continued to inspire me with her path in continuous evolution and constant “questioning” of what’s ethic or not. I will tell you more about this friendship, which had a huge impact on my life, in my next article.

For now, I’ll only say that her talk has triggered in me a heavy crisis of conscience (as well as many tears) that concerns ” what we “influencers” doing with Instagram?”.

Sara has talked about her life since she was a fashion photographer (first crisis of conscience: I’m contributing to making women feel like shit), when she became a travel influencer (second crisis of conscience: I’m proposing unreal life standards) tonow, where she works with NGOs and travels the world trying to connect with the locals instead of hunting for Instagram spots.

Is it possible for a rotten apple to rot the whole apple cask? Yes.

And can the negative behavior of a single individual influence that of all the others? Yes, research says, if the individual is considered as a “mate”, as part of your group of friends.. 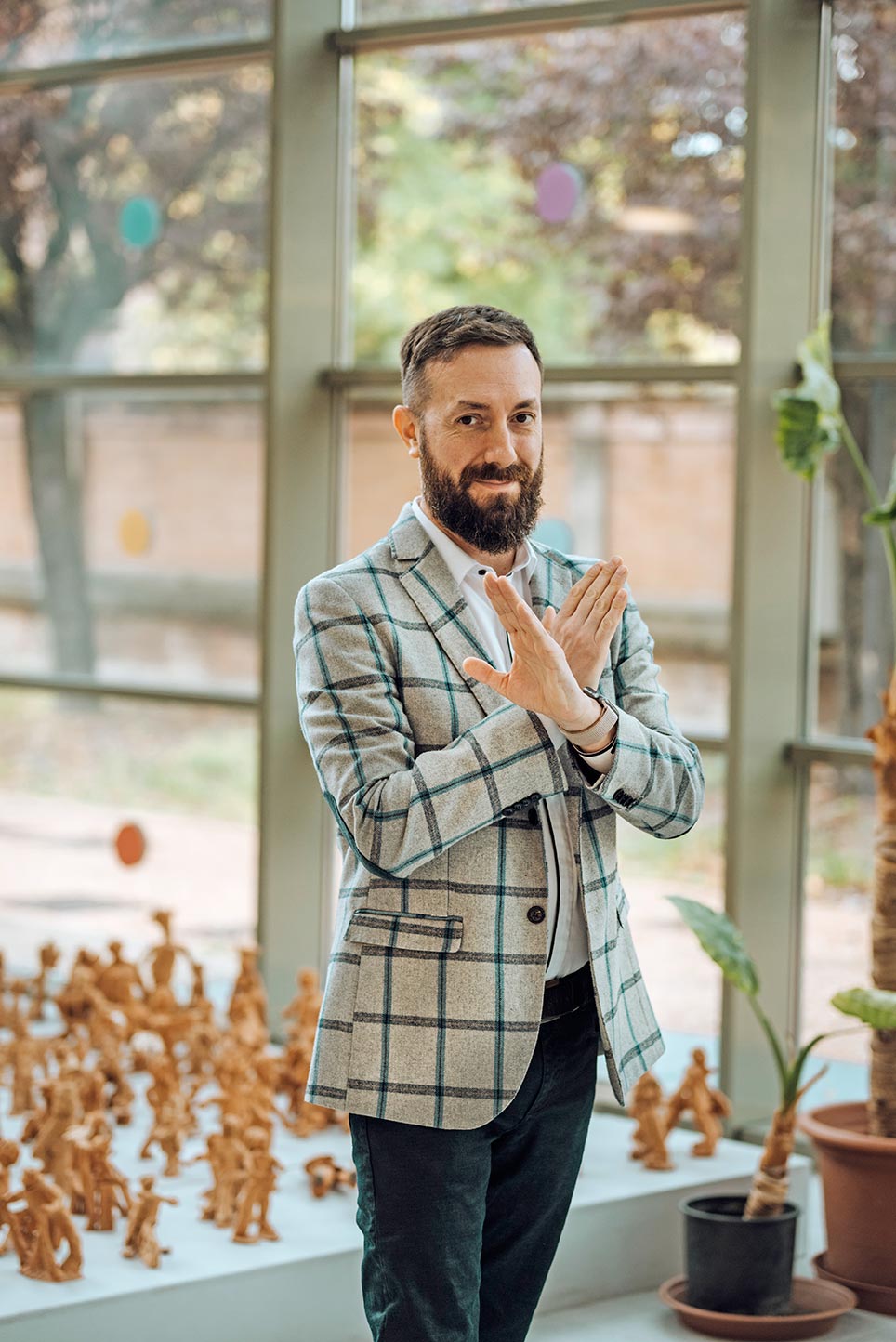 Just as we had witnessed in Zimbardo’s experiment, where a simple game of guards and thieves quickly turned captors into real tormentors, Ivano shows us how on social media the ability to empathize with others is completely absent, because of the feeling of “lack of responsibility”.

Social media is a fundamental tool, but we must remember that behind the screen there are real, fragile, people. 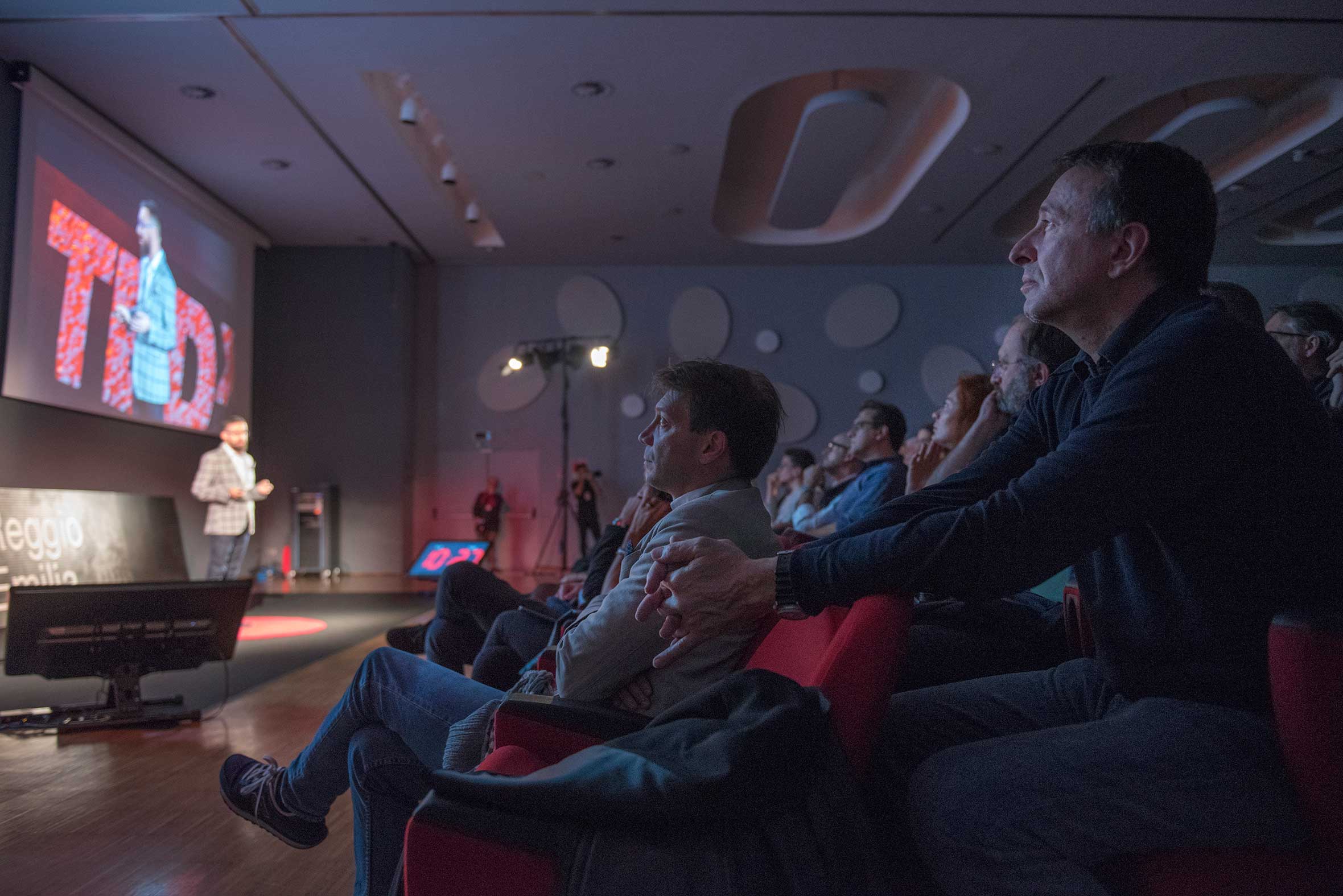 Roberta Gilardi – Innovation Expert | The butterfly in the case

It’s normal to feel lost in this technological society, which has changed enormously in the past ten years. Roberta’s talk was full of both positive and negative examples, which included: 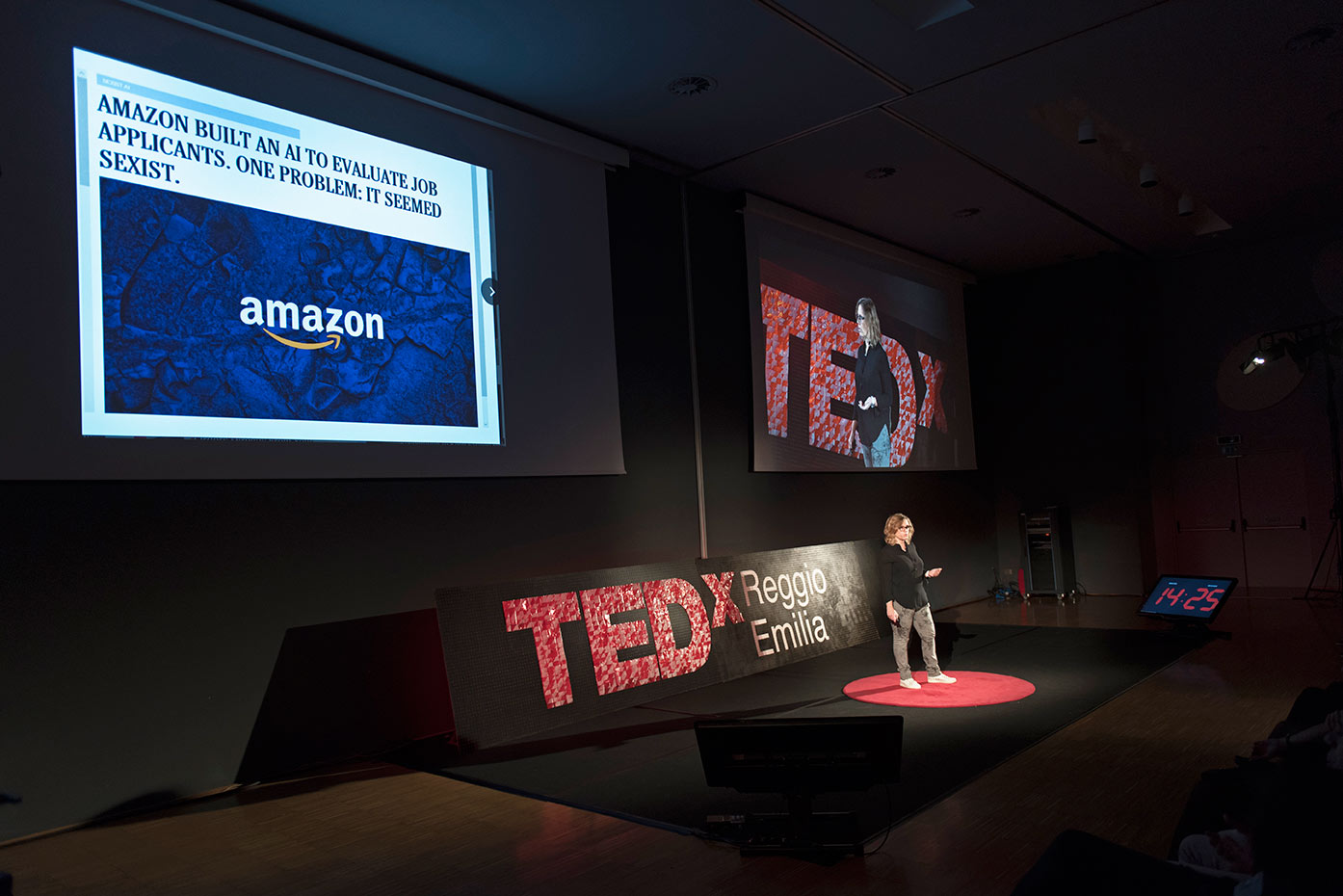 Roberta concludes with a quote from Blade Runner saying that “we are no longer part of the business: we, as humans, have become the business.” Have we already become “data objects”? The butterflies inside the case?

With cystic fibrosis, Marco was the first pulmonary transplanted man to climb over 4000 meters with mountaineering skis. His talk was touching and, at times, for me almost “disturbing”. 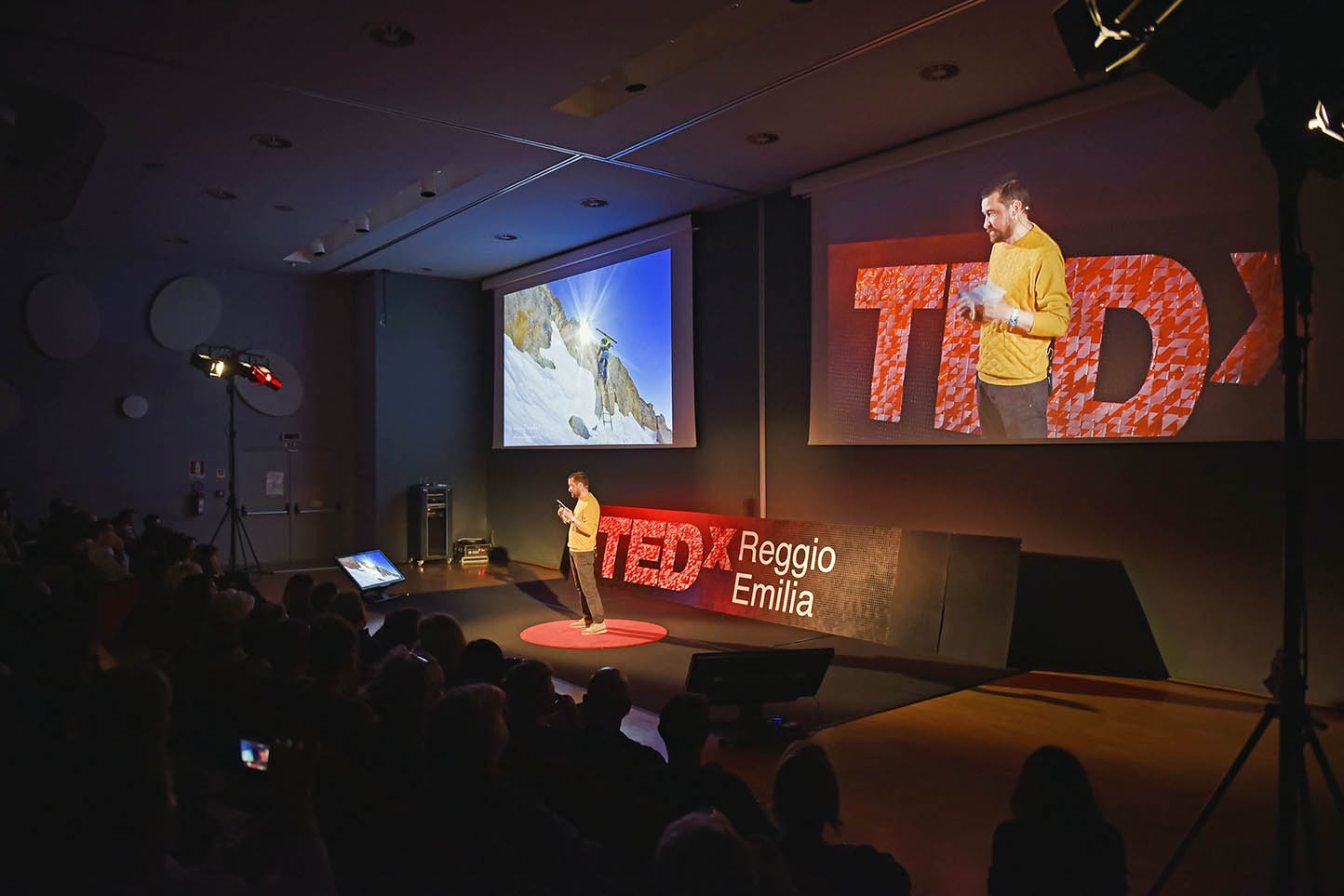 Despite being immunosuppressed Marco spoke in a room with almost 400 people, describing how for him even the simple act of breathing must be a conscious and not a mechanical act at all.

“I live thanks to technology, you’re listening to my donor’s voice.” He concluded the intervention with images of his beloved mountains, which he conquered, he says, not alone, but with his donor. 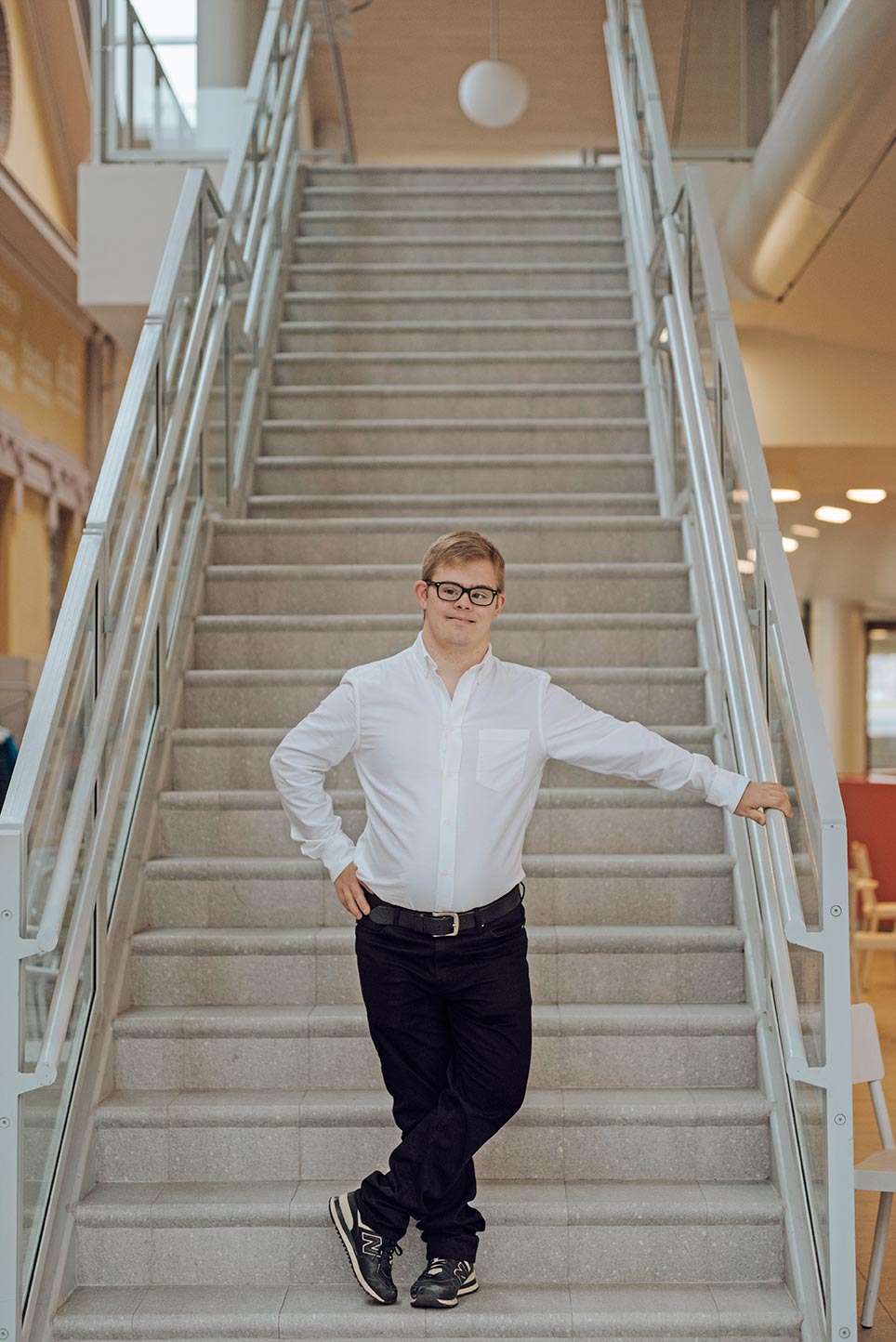 Mikkel was super brave to get on the TEDx stage and really warmed our hearts, talking about how for him the down syndrome is not a disease but a way of life.

He told us he’s in love and has many passions (including Reggiana!). “I have a family, a girlfriend, I have a job! I’m not sick!”. He concluded by saying that he dreams of a TOP DOWN society, where his syndrome is not considered a disease but a valuable resource for the community. Amazingly done Mikkel!

Claudio’s talk was the one that struck me most, in its simplicity and power. I always thought that if I ever talked at a TEDx event, probably due to my personal characteristics, I would fill my talk with a thousand examples, a thousand data, a thousand demonstrations.
Claudio has done the opposite. In all his simplicity he shared with us two things: an African legend about a hummingbird who managed to extinguish a fire (which you can read here) and a testimony from his first mission in Africa, when donating $ 5 as a gesture of gratitude to a local man triggered a mechanism by which the man no longer showed up at work, spent most of the money in alcohol and was removed from the community. He did not know that $ 5 was practically his one-year salary and that he wouldn’t have been able to handle it. 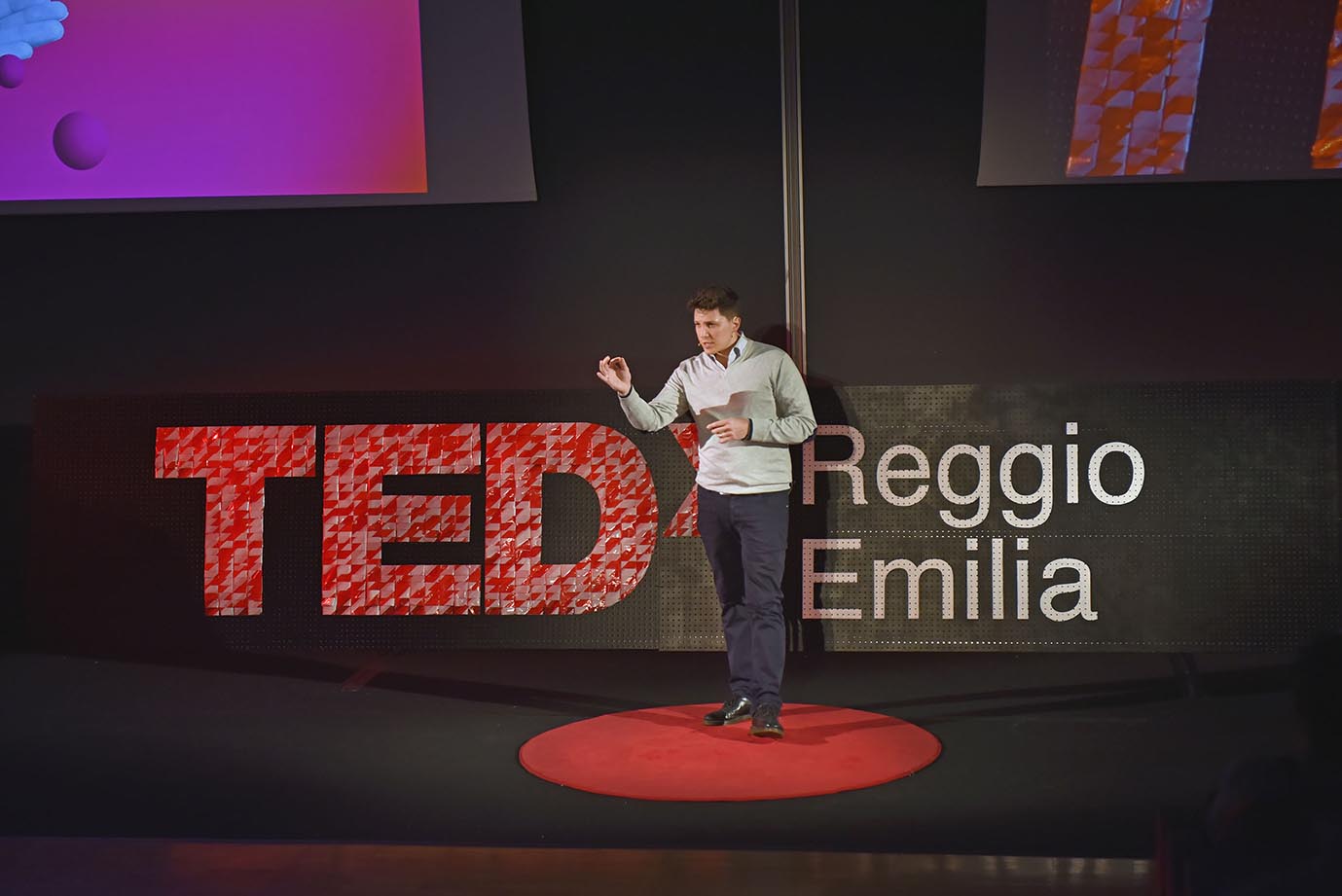 We will not save Africa, he told us, with suitcases full of money. We can only help if we are able to transfer our knowledge and, above all, skills.
We are all unique and irreplaceable, we all have at least one competence and we have the power (and responsibility) to help others through it. 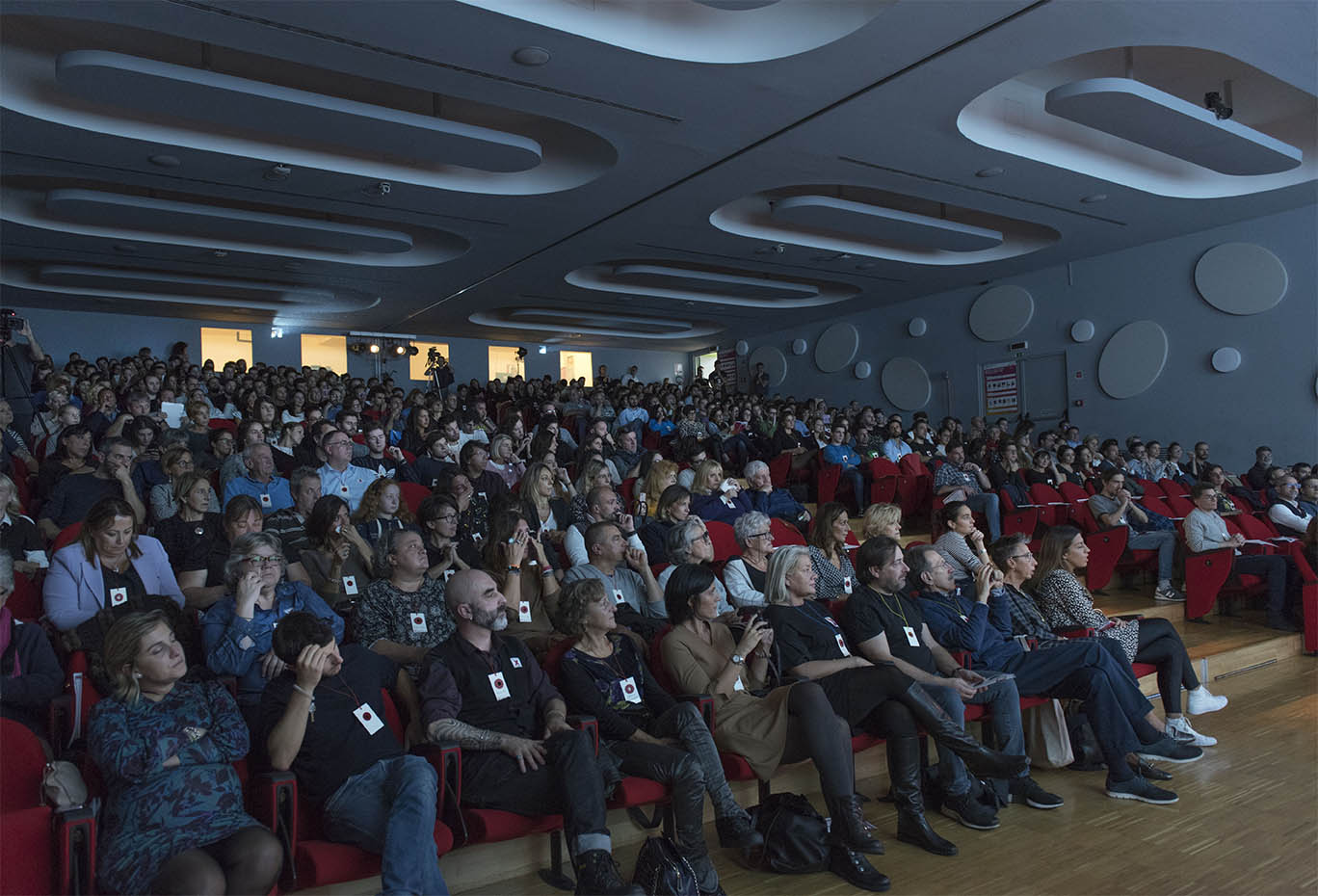 Giovanni is a fragile boy, with difficulties in speaking and expressing himself through vocal words, but who had the courage to bring his experience on the TEDx stage.

Thanks to the “facilitated writing technique” it was discovered how much Giovanni, and many other guys like him, were stuck in word communication but actually had a universe inside that they couldn’t wait to share. 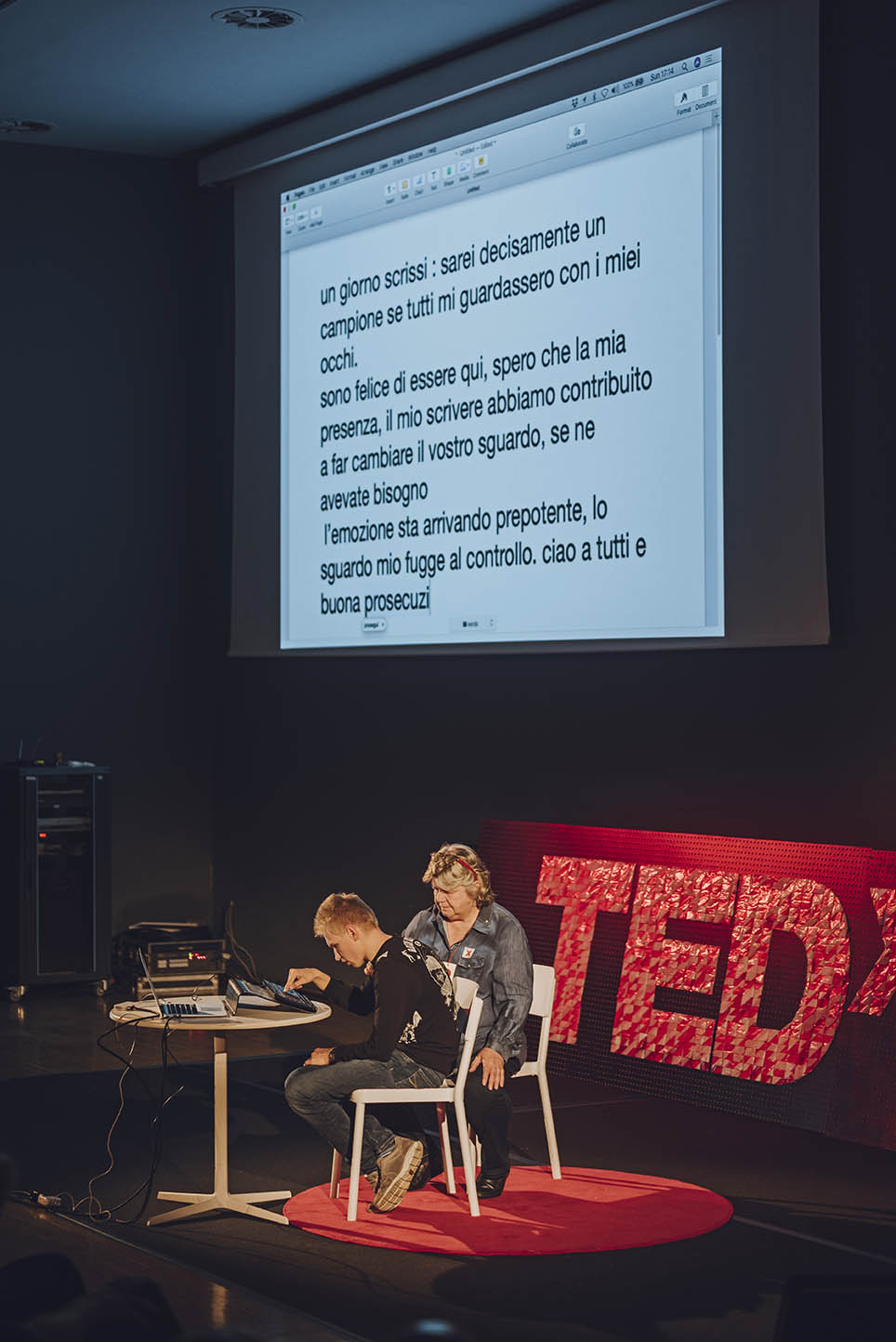 “I would definitely be a champion if everyone saw me with my eyes”. Giovanni held us in suspense for 18 minutes while composing his words, letter by letter, through a computer, in silence. Staying in this profound silence touched me a lot and reminded me even more of how unnecessarily frenetic our life has become. 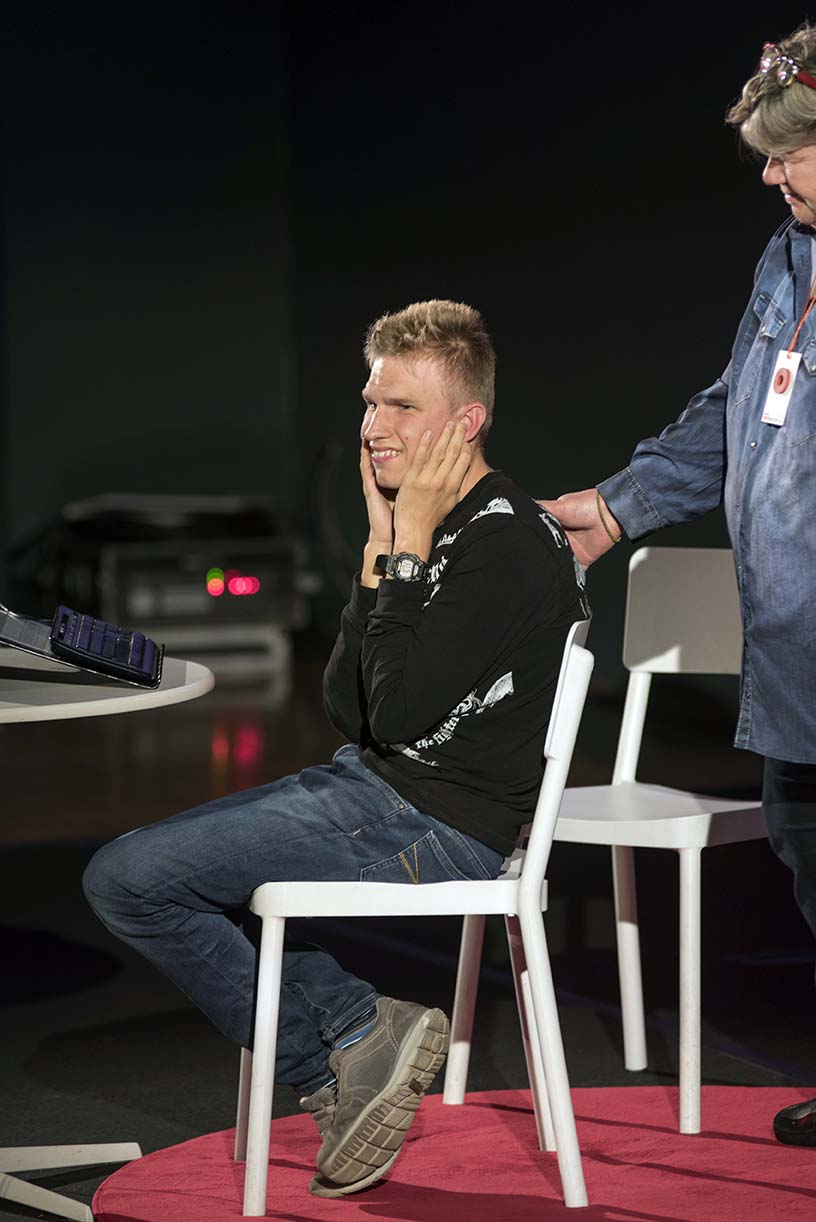 “The most powerful tool you have to communicate with your DNA is the most human thing you have: emotions”. Encouraging us to take each other by the hand, Dr. Erica Poli made us reflect on how all the parts of our body are interconnected. 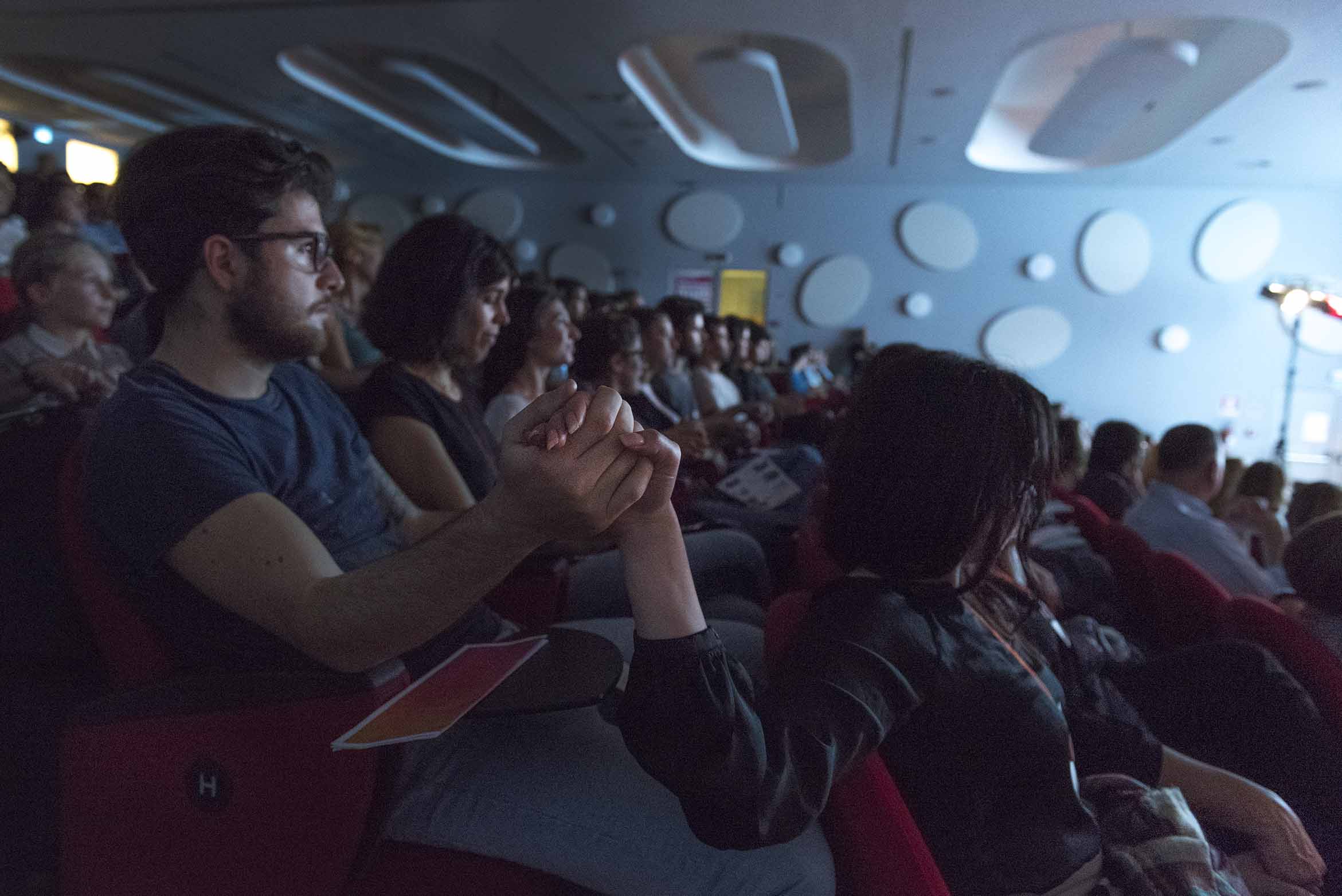 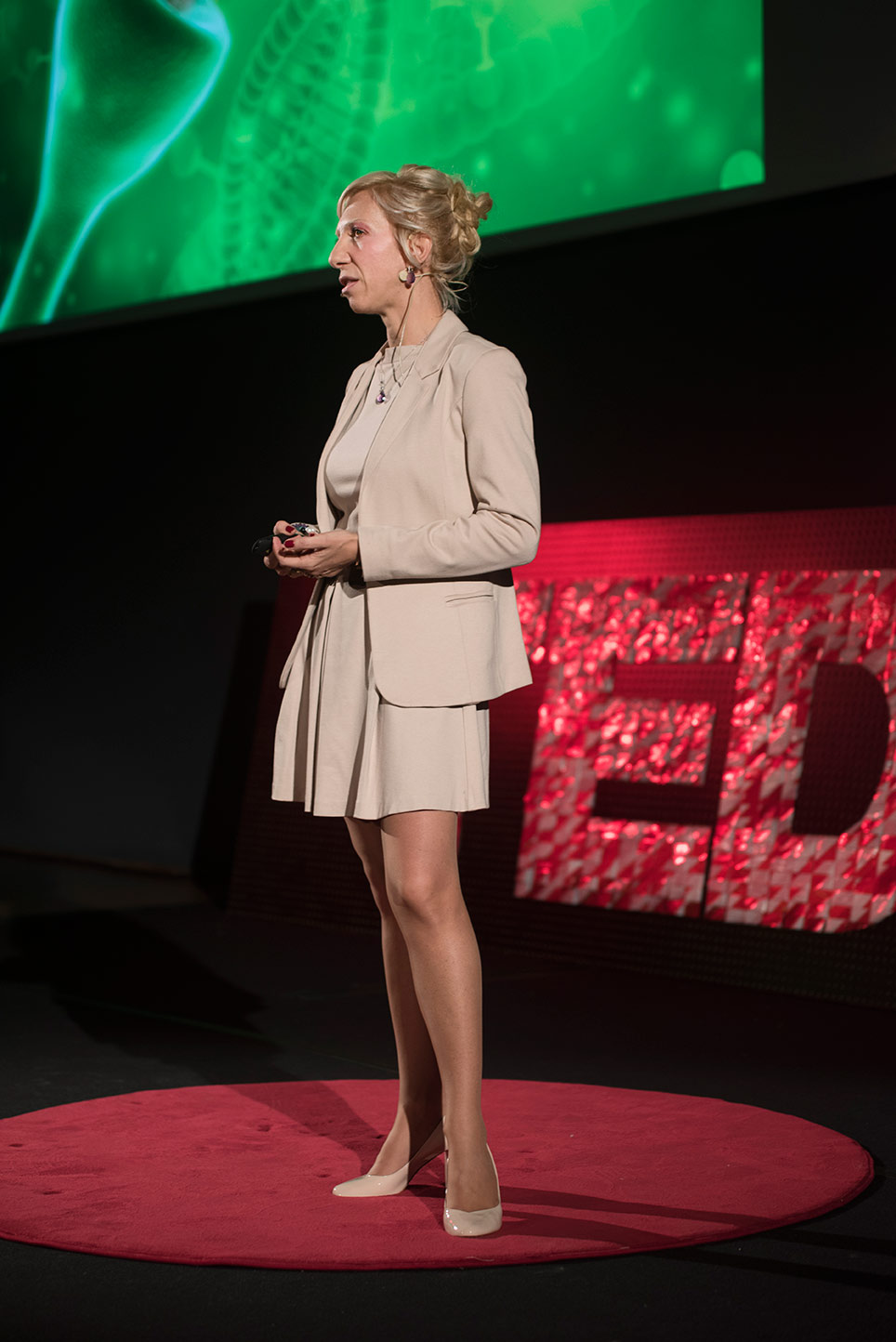 The part of her speech that impressed me the most is undoubtedly the one where she told how one of her patients, after receiving a kidney transplant donated by her mother, had rejected it, although they were completely compatible. Mother and daughter did not get along, and in the transplant a fundamental aspect was not taken into consideration: emotions.

But also: a mother can transmit her emotions (negative and positive) to the fetus to the point that it will influence those of later generations. Impressive, isn’t it? 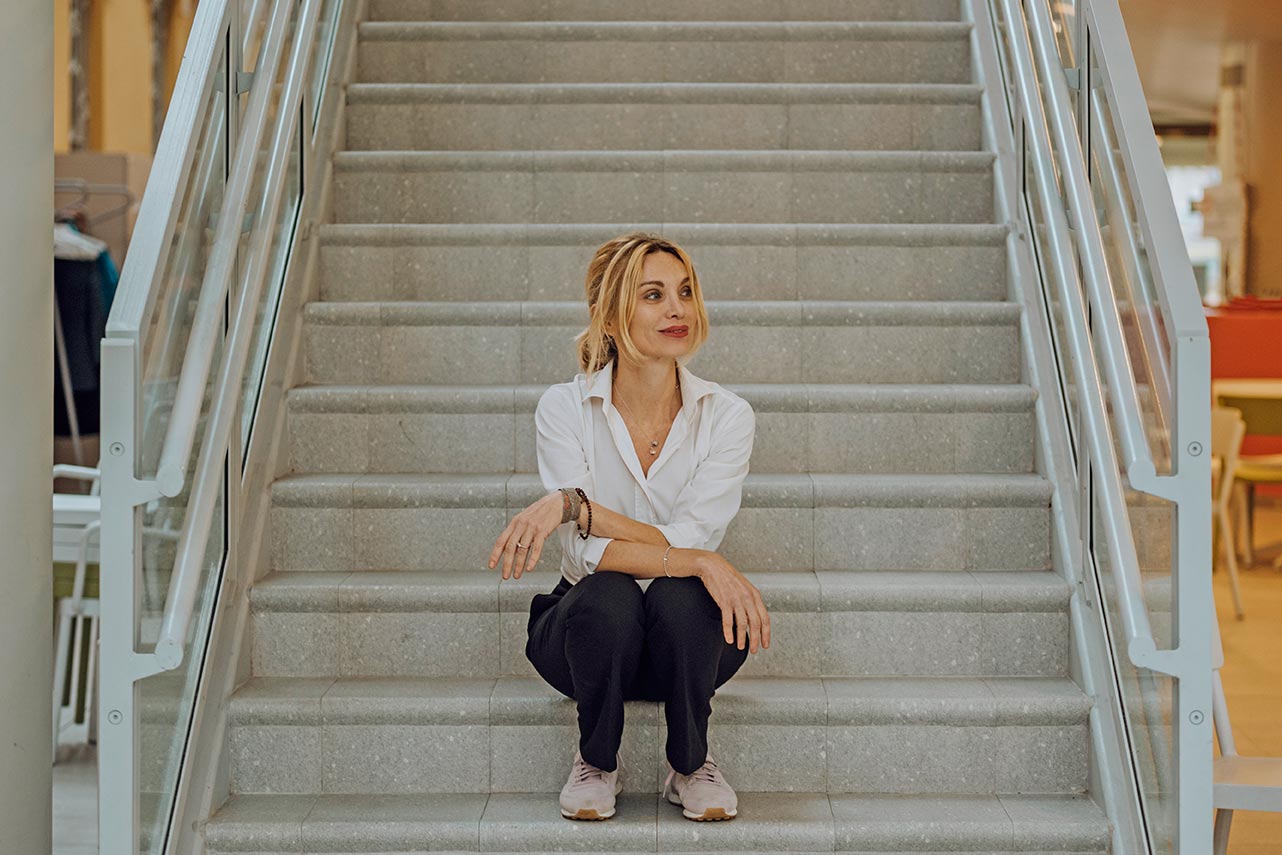 8 seconds. This is now the threshold of our attention, before moving to another device, to another stimulus. One second less than a goldfish. But no wonder: did you know that there are more phone subscriptions than humans on this planet?

The journalist of Rai 3 – Presadiretta Lisa Iotti brought us results of the research she has recently concluded on how much technology has made us distracted and unable to concentrate.

Thanks to the eye-tracking technology, she showed us how the way we read has changed: it’s linear and logical when we read a paper-based article, but squirts like a crazy ball of a pinball when we read an article online. 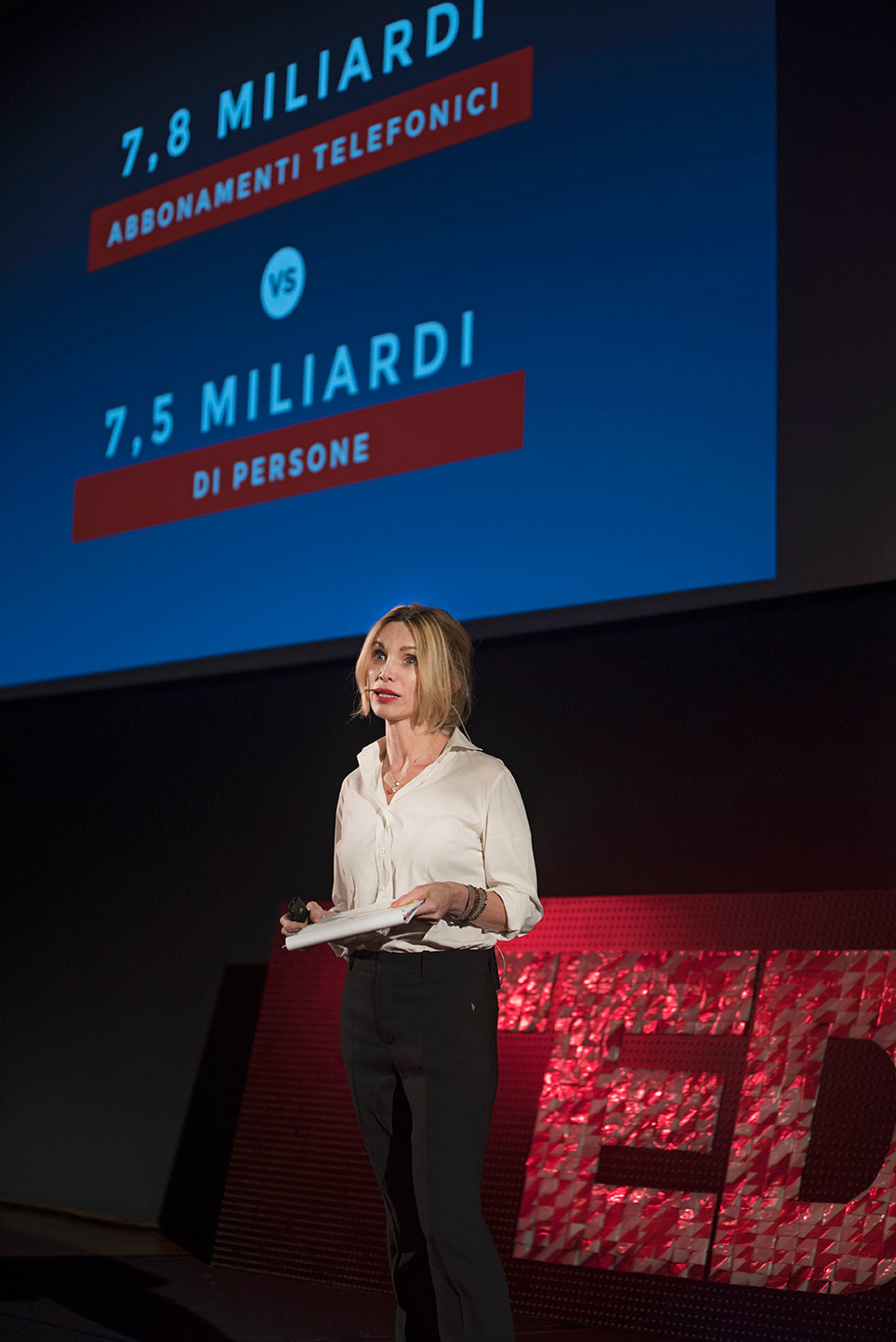 Roberto Mancin – Pediatric IT – and Pepper | Robot beyond Humanity 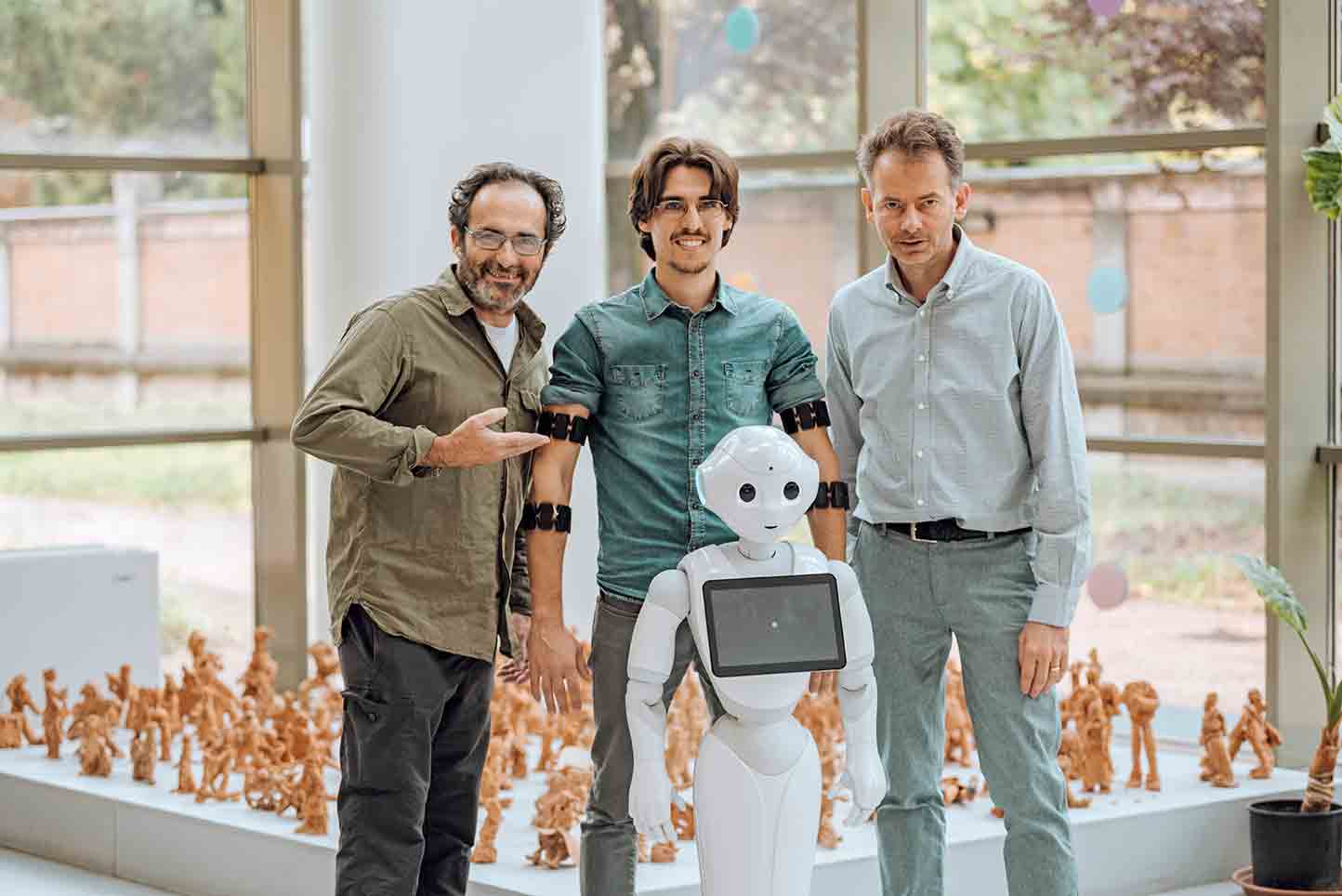 I really appreciated Roberto, outside and inside his talk. He told us how Pepper the Robot is ideal for children, who get too scared by nurses or doctors that are too tall and open up more willingly to the magic of a talking robot than to a psychologist. He also told me, chatting the day before, that is the use of Pepper doesn’t want to be a substitute for pet therapy but a valid alternative, since dogs get too stressed if touched by different hands and live less. 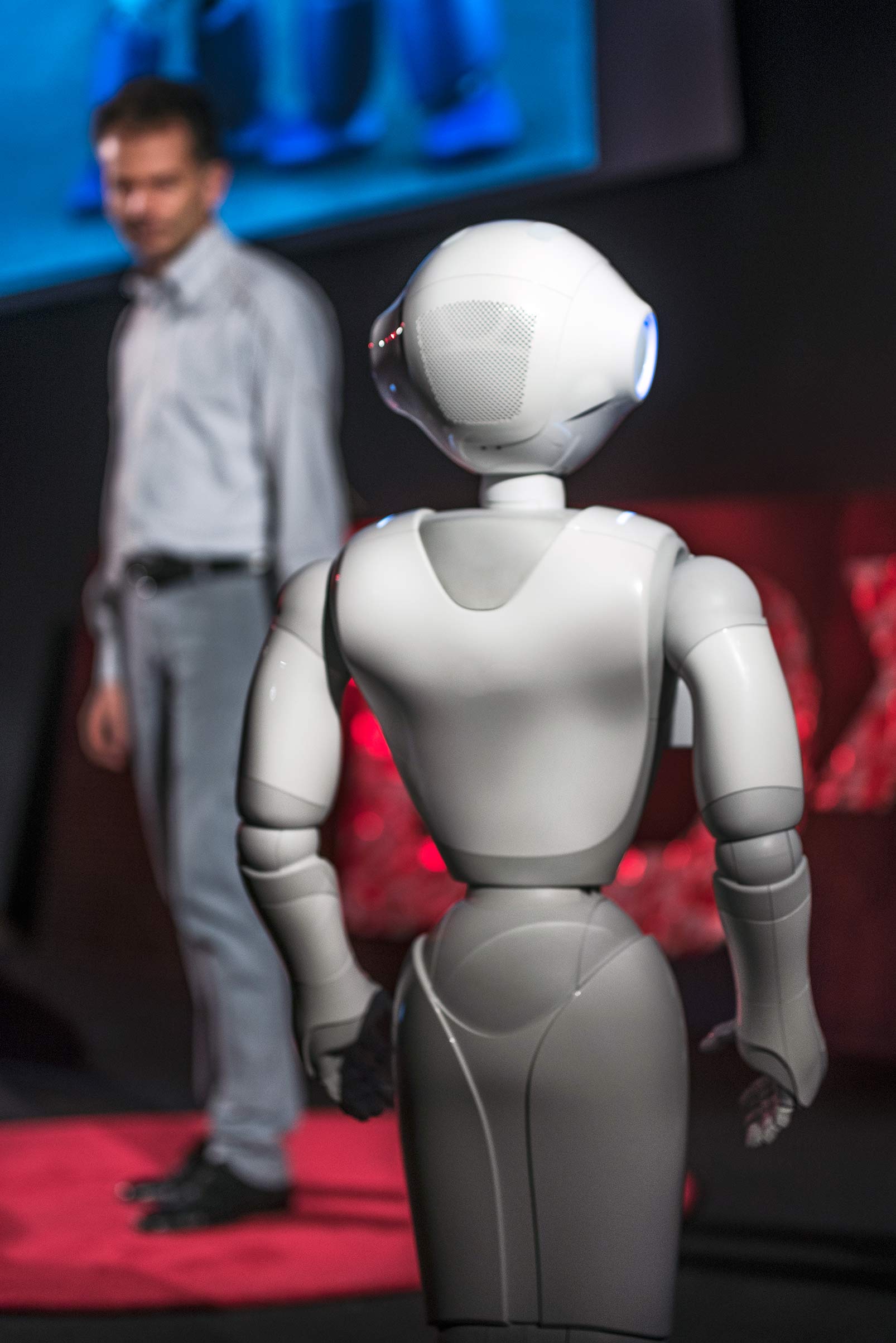 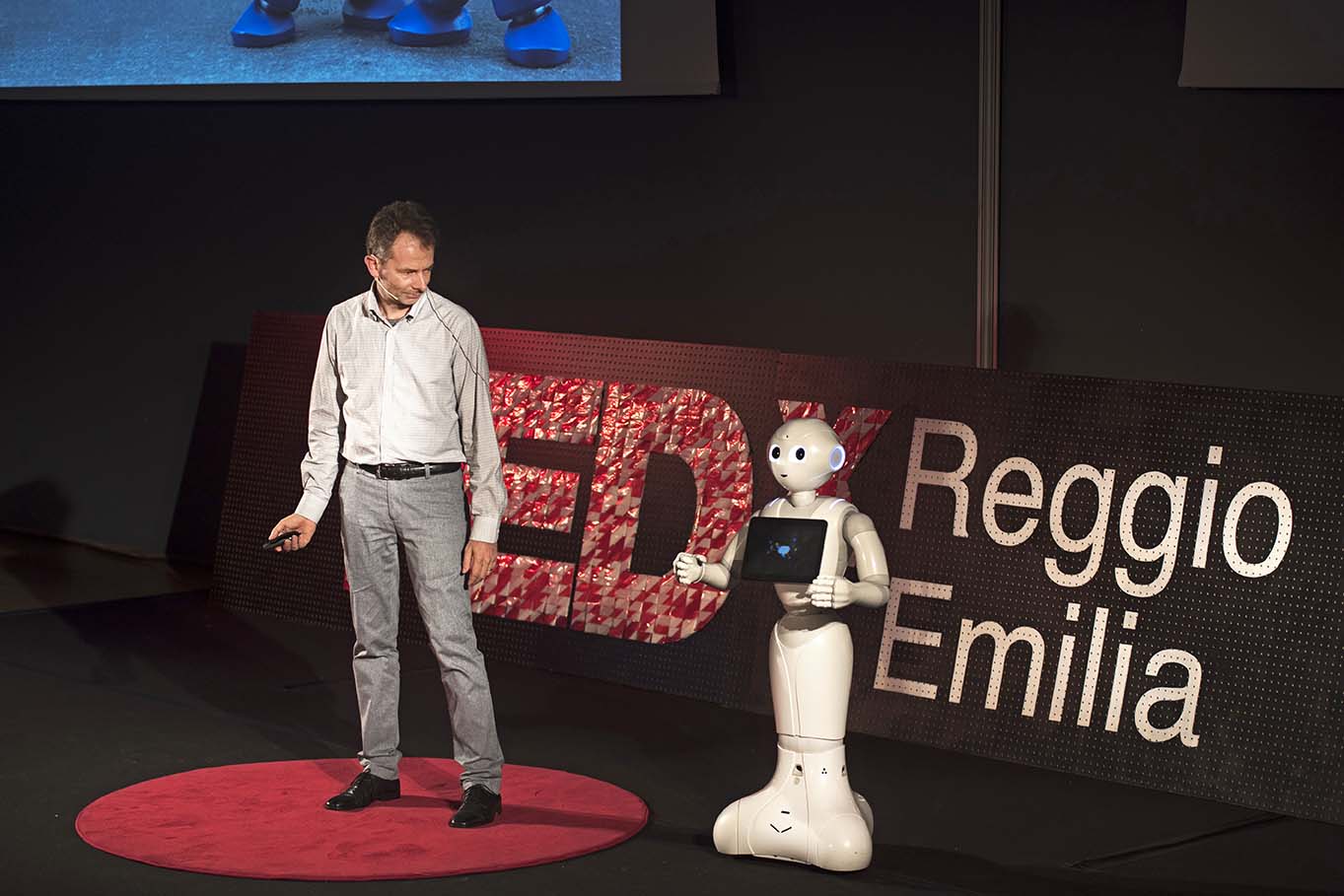 “On stage”, he said,”I was very nervous but the presence of Pepper, who helped so many children in the hospitals, helped me as well.”

“I didn’t receive a blue bow when my son was born”, Annalisa begins, “I didn’t get congratulations, when you give birth to an imperfect child everything goes differently, but we managed to turn a great pain into a great project. ” 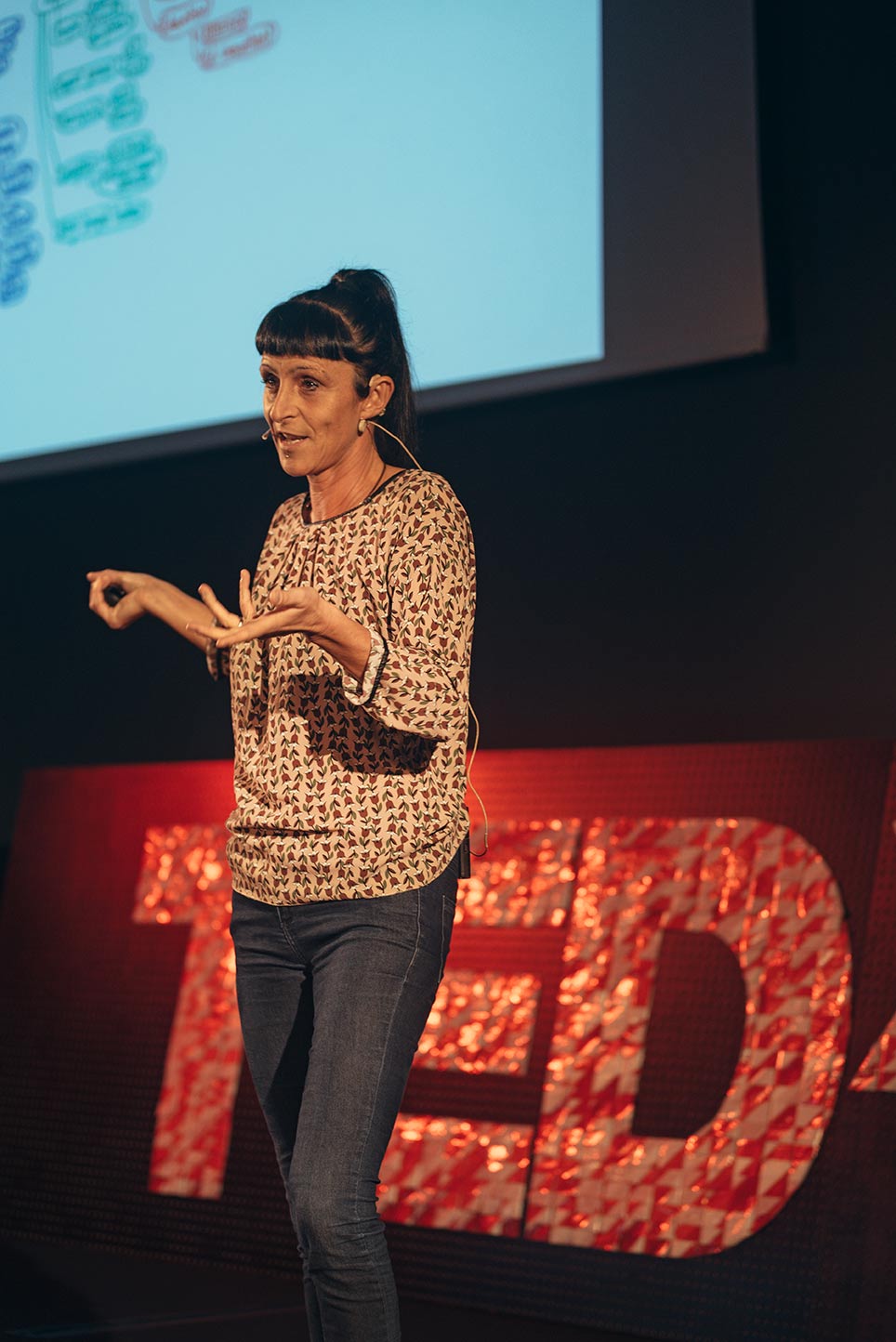 The story of Annalisa, the mother of a disabled boy who commits himself to build a society without barriers and which identifies in beauty an essential value that needs to be brought in the spaces and in the lives of the most fragile people, has touched all of us.

Diego Ingrassia – Behavior analysis expert | Can an emotion exist without a body?

Diego closed this TEDx  with great energy and personality. 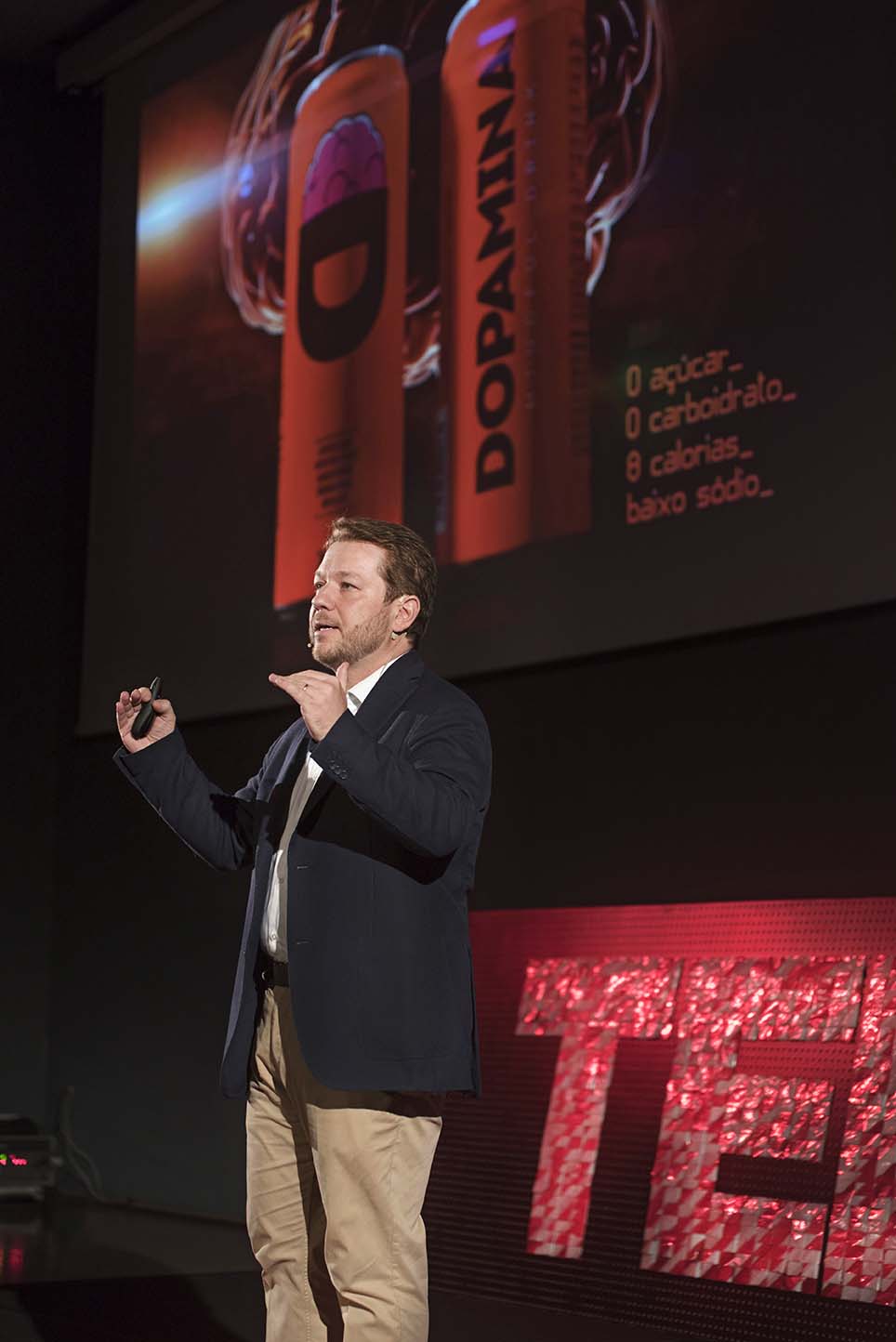 He brought to the attention disturbing data that sound strangely familiar, like the fact that 80% of us fall asleep looking at a smartphone and 83% of us in the middle of the night wake up to read emails and check communications.

He then talked about his son, who has almost begun to perceive Google Home as a member of the family.
“For me though”, Diego concluded, “there can not be an emotion without a real, physical body”. 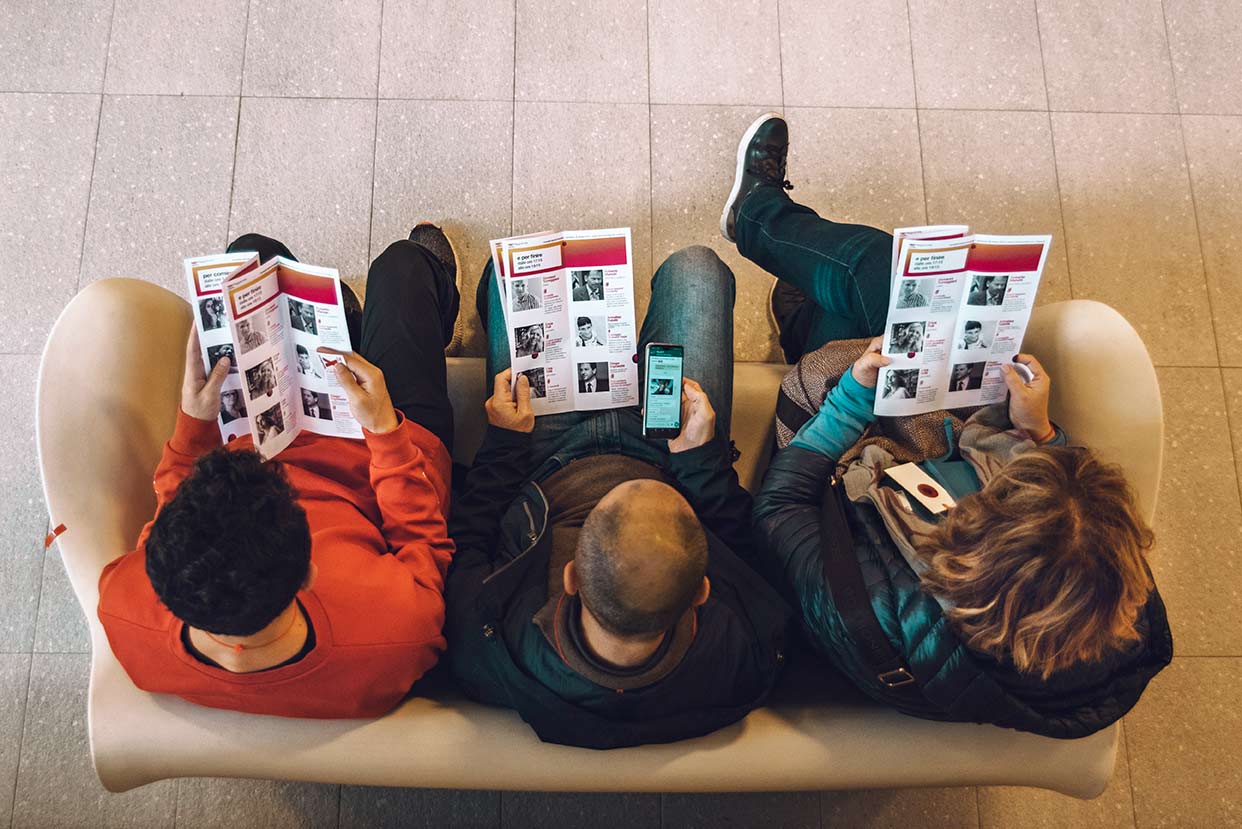 That’s all from TEDxReggioEmilia 2018 folks! Support your local TEDx no matter what and get inspired!

Ps if you wanna have a look at more reportage photos, click here! 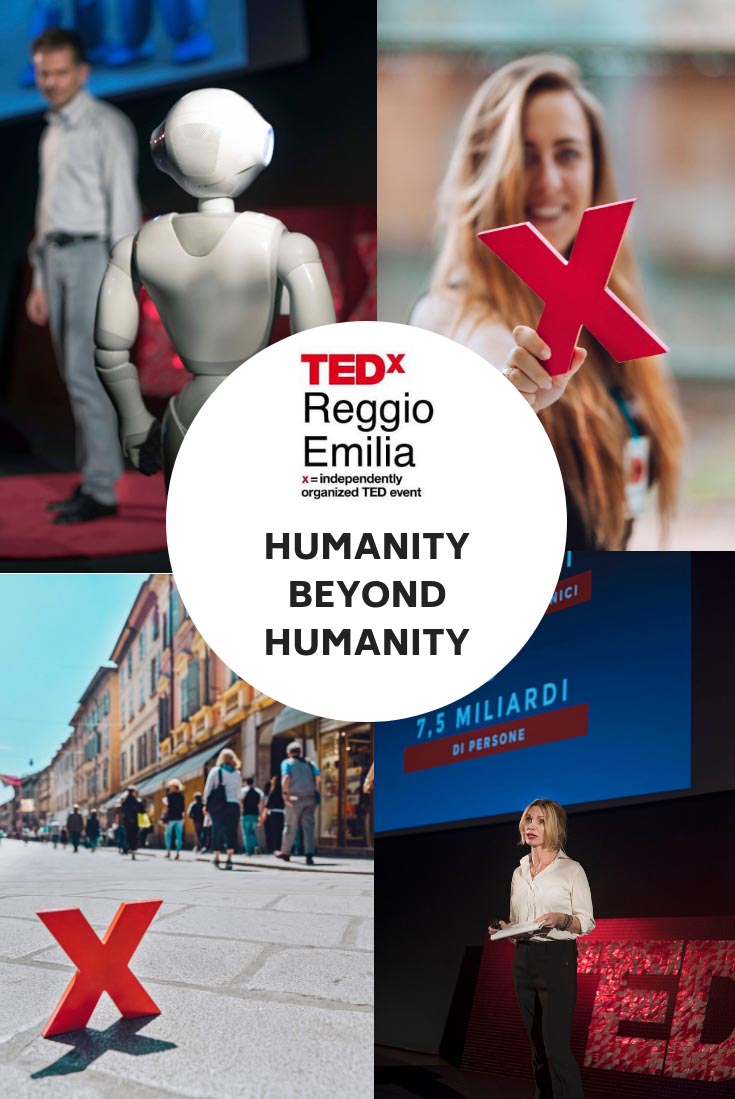 I explored Alto Adige in collaboration with Romantik Hotels: discover with me the perfect holiday itinerary through Vipiteno, Latemar, Rosengarten,...